One of the most popular development languages and application runtimes is Ruby on Rails. From Wikipedia:

Ruby on Rails, often simply referred to as Rails, is an open source web application framework which runs via the Ruby programming language. It is a full-stack framework: it allows creating pages and applications that gather information from the web server, talk to or query the database, and render templates out of the box. As a result, Rails features a routing system that is independent of the web server.

Ruby on Rails emphasizes the use of well-known software engineering patterns and principles, such as active record pattern, convention over configuration (CoC), don't repeat yourself (DRY), and model–view–controller (MVC).

Create a CenturyLink Cloud server and update to Ubuntu Trusty

We need to get the CenturyLink Cloud server and OS created and set up. Follow the directions here to do so. Note: In addition to the standard ports (when adding the public IP address) you should specify port 3000 as well. This is the Rails default port.

While you can do initial development with the built-in SQLite database you will not want to go to production, or even serious testing, without a more industrial strength database. The standard choices are either MySQL or PostgreSQL, today we are going to install and use PostgreSQL.

First, let's update our apt information and then get the packages we need:

When PostgreSQL was installed it set up a standard default user postgres. For ease of use we are going to remove the database password from this account.

What the above commands do is:

In order to ensure we can connect locally to the database we need to alter the _pg_hba.conf_ file.

Currently this is located in the /etc/postgresql/9.3/main/ directory. Find the following section and update "peer" and "md5" to "trust". 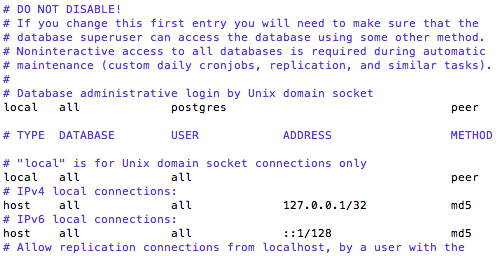 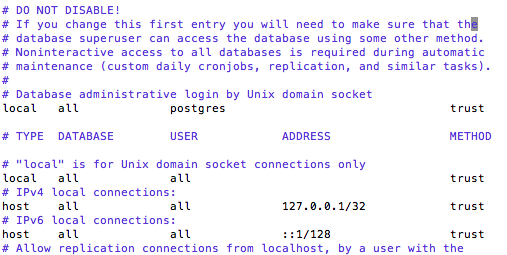 Lastly, we need to ensure that PostgreSQL is listening correctly for localhost connections. To do this we need to edit the file postgresql.conf, located in the same directory as the pg_hba.conf file. Find the line _listen_addresses_ and ensure it looks like: _listen_addresses = 'localhost' # what IP address(es) to listen on;_ (you should be able to just uncomment this line).

The PostgreSQL database should now be running and you should be able to connect and interact with it locally (just as our Rails applications will). To test enter the following:

Now that we have the operating system and database set up, let's complete the exercise by installing the Ruby language and Rails runtime. We will not be doing this as root so first let's create a login (user and password).

When prompted add centurylinkdev as the password on the account, then take the rest of the defaults. In order to give centurylinkdev the correct privileges we must add the user to the sudoers file.

Once the file has been successfully edited press CTRL-x to exit the file; and _Y_ to save the changes. Logout as the root user and then login as centurylinkdev. We now have a normal user with sufficient privileges to install and run Ruby on Rails.

To start with, we are going to make sure the apt repos are up to date and then install some dependencies.

There are a few ways to install Ruby, we are going to use rbenv as it one of the most popular install systems. Of course, first we have to install rbenv and then we will install Ruby.

Note the version of Ruby installed on the system. Also, let's not have all the Rubygems packages documentation copied locally:

Before installing the Rails package we are going to install the NodeJS runtime. This lets us use Coffeescript and the Asset Pipeline in Rails, this combines and minifies the javascript to provide a faster production environment. The initial command is to fetch the software-properties-common package that contains the add-apt-repository command.

And, finally, we get to install Rails:

Run the following command to ensure that Rails is properly installed and at the correct version:

Getting ready to ride the Ruby on Rails

We are very close to being done...We have to set up a PostgreSQL user, hook up the database, and then create our initial Ruby on Rails application.

Create a PostgreSQL user that has permissions to create databases, or expediency sakes name it the same as the current login user (centurylinkdev). If you decide to create a different PostgreSQL user you will need to update config/database.yml to add the new user to the credentials for the databases you create.

And the grand finale... Let's create the initial Rails application:

At this point you should logout and re-log into the centurylinkdev account. Run the following:

And, viola! You have a Rails application server running at PUBLIC_IP:3000. Point a browser here and you should see: 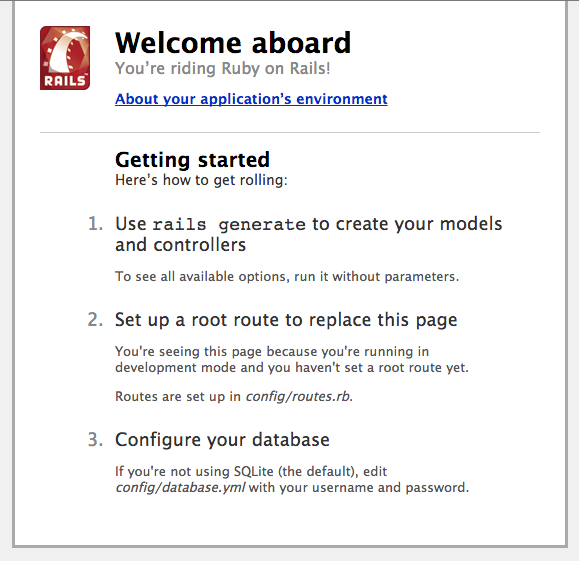 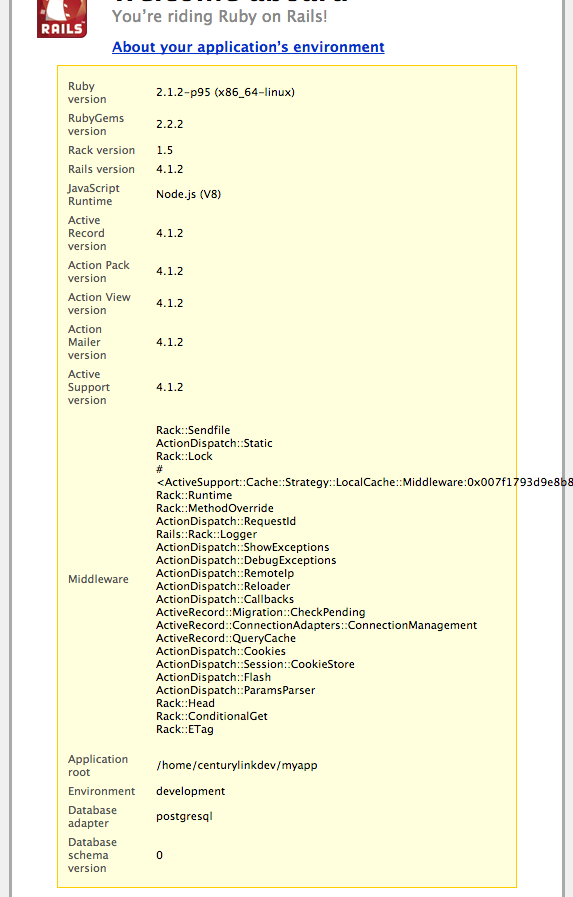 Now that you have the Rails framework up and running, with all components at the newest levels, you are ready to start writing the next big application in Ruby on the CenturyLink Cloud!

Why to Not Trust the Root User with Your Data

The cloud revolution has ushered in some amazing advancements in the IT world, but with advancements...