Everything was set for my presentation. After a ten hour flight the day before, I was settled in a Swedish conference room, my slides projected on a screen. My presentation wouldn't start for 90 minutes, but I wanted to be prepared before joining attendees for lunch.

As you've guessed, when I returned to the room, the projector refused to cooperate. Furious unplugging and rebooting were futile. At the organizer's suggestion, I began my talk without slides while he called in technical support. I drew diagrams on a large pad of paper, attempting to evoke the information in my slides. Finally and thankfully, the projector flickered on.

My nightmare was over. If you've shared code live or presented at conferences, you likely know the feeling of horror when the Internet, your code, the audience, or some other entity doesn't work in your favor. It's more frightening than any Halloween costume. 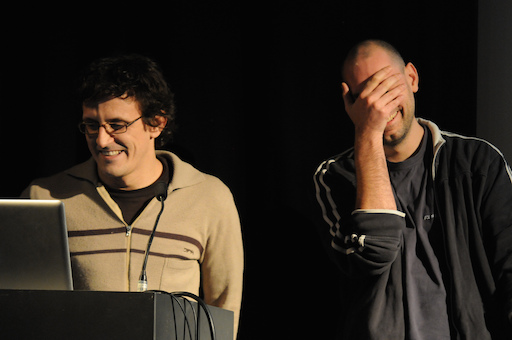 You aren't alone, as I discovered when I reached out to hear others' demo horror stories.

Technology finds opportunities to get in the way, even when the projector is operating normally.

"I've had my share of demo issues. There was the time the screen wouldn't show 'presenter mode' and I hadn't memorized all my talking points, so the 60 minute keynote was done in about 30."

Perhaps the most common and easiest way to put a presenter in panic mode is when the Internet is unavailable. Sometimes this can happen in unpredictable ways.

"We were doing a big Scratch project with Seattle CoderDojo, and it's a web-based IDE in Flash with a downloadable Adobe AIR version.

A couple of hours before 100+ kids were supposed to arrive, I see a tweet that they're taking down their web site for maintenance at the exact moment we start our event"

"I rehearsed a demo about 10 minutes before giving it and forgot to switch everything back to 'live' mode.. Triggered the demo and told the 40 odd people that awesomeness was about to happen... Nothing.. Tried again.. Nothing.. Well, thanks for coming everyone. Let's just say they didn't buy it."

Of course, the classic demo fail involves programming under pressure.

"Giving my first demo ever at a student Hackathon, I was typing away, and got to the place where the students emailed in. I waited a good fifteen seconds for people to shout that they got an email, but nothing was happening. I started freaking out a little, then a voice came from the front row, 'you forgot a semi-colon.'"

"Tons of prep for a lab, only to have the company post an update to the SDK which broke many things hours before the start without telling us. Attendees downloaded the latest on site and ... queue the fun."

You may do everything right, but sometimes someone else has a different idea.

"At my previous job, whenever a teammate presented while keeping the Instant Messenger open (big no-no), I would send them inappropriate messages like 'You left your pants in my office' or 'Did you tell him he was fired yet?'"

"My favorite one was that hackathon that I paid to sponsor, and spent about $4,000 in travel and expenses, only to show up to be informed that they decided not to have demos... since 'they'd take a long time.'"

"I went to Tel Aviv and my clock was off by an hour and I missed my demo. Fun stuff."

The Audience is a Wild Card

Many times the biggest question mark is the audience itself. Maybe you've prepared for a beginner audience, but the crowd is technical--or vice-versa.

"I was doing a live presentation in the Philippines. I was told everyone spoke perfect English, which they did, but I wanted to check if everyone was comprehending what I was talking about. So I starting calling on people to see if they were grasping the info and making jokes with them. Anyone I called on or made jokes with would smile and laugh! I was killing! By the time I was done, the room was in an uproar. Nailed it. Cloud nine. Walking ten feet tall. When I left the room, my 'guide' (who had also been in the presentation) delicately informed me that a nuance of this particular culture is that when people are nervous, they react by smiling and laughing. I was offending the whole room."

"I once gave a webinar titled 'On Demand, The Musical.' It was supposed to be for the uber-non-technical crowd. I composed a couple dozen songs staged to familiar tunes, like On Demand, Why Not Take On Demand... (sung to All of Me...) And of course, I sang them out at staged intervals. Which was, of course, utterly delightful (to me) and fun (to me.) But about half-way through, a viewer who didn't realize they were NOT on mute said 'Ugh, I wish she'd just STOP singing...' I died laughing..."

Some Demo Fails Can't Be Avoided

Try as we might, some demos are just destined for the toilet, sometimes literally.

"I worked on a construction site and I was giving a demo of a badge tracking system. Suddenly the system went down. Literally, the server fell into the toilet. Why was the server there? Well, that was the office furthest away from where bad things could happen and someone was to grab the server and run if bad things happened."

While it's rare to have a demo get that... dirty, Keen IO's Sarah-Jane Morris suggests we follow her lead and pray to the Demo Gods.

Twilio's Rob Spectre offers another perspective: "There is but one true Demo God, and Her name is Rehearsal."

What's your demo horror story? Share it with the #demohorror hashtag

If your disaster recovery site sits on CenturyLink Cloud, a managed SafeHaven team is available to assist or do wide clo...