Using Docker, your applications sit atop an excellent platform for packing, shipping and running low-overhead, isolated execution environments -- so it's no wonder that many teams are choosing Docker for deployment. But your deployment choices directly affect your development workflow, because your Dev, Staging, and Prod environments should match each other as closely as possible.

No matter where you are on the stack, if your apps are deployed inside a container, you should get to know how to use containers in your development environment. The great news is that Docker makes it easy.

In this tutorial, we'll be working on developing a simple Sinatra application. If you'd like to try it yourself, you can pull down the code at https://github.com/rheinwein/hello-world-container-demo.

Before getting started, make sure that you're able to run Docker in your environment. On Linux, simply install Docker via the official packages. On a Mac, I recommend using Boot2Docker, a tool that will fire up a Tiny Linux VM and make working with Docker extremely easy.

There are two different ways of developing with Docker. First is what I refer to as the static container way: running code inside a container that does not need to be modified during the course of development. Most likely, you'll use this style for dependencies, and also during QA and testing. In this type of container, the code is packaged up and you can't modify it after the image is built and the container is running.

The dynamic container way is what you'll use when working on an application under active development. Instead of running an image with the code packaged up, you'll link the folders from your dev environment to the container by mounting them as a volume. You can work on the file on your local system and see the changes propagate all the way through the container.

The Static Way: Dependencies and Testing

For the sake of simplicity, we'll look at the simplest way first: the static way. These types of images, when run in a container, provide an immutable service. You can interact with it, but not change the code. You'll want this type of service for dependencies, and you'll likely build your application in this way when you're ready to test and ship.

Building your own static service

Here is a Dockerfile for a static Sinatra application that prints out "Hello World" in the browser.

We'll break down the important parts of this Dockerfile:

ADD . /usr/src/app -- copy all of your current files into this directory

The ADD instruction copies everything in the current directory into the /usr/src/app directory. Once the copying is done, you won't be able to modify this code.

Running docker build -t hello-world . will build this image on your host. You will see each layer of the image being downloaded.

You can check to see that your image was downloaded successfully by running docker images.

Next, run this image inside a container.

The -p flag sets up a port binding rule of -p host_port:container_port . If you're working with a VM (like Vagrant, etc.) remember to also set up a port forwarding rule on your VM in order to access the application from your host. The -p flag only creates a rule from the container to the container's host system, which, if you're not running Linux on your local machine, is most likely a small VM. If you're using Boot2Docker, you can either set up a port forwarding rule to access the application on localhost:XXXX, or you can use the Docker host address given to you during setup. 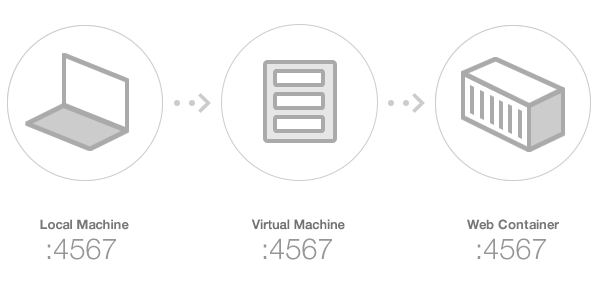 After the port rules are set, you can access your application in your browser at localhost:4567.

Grabbing a dependency from the Docker Hub

But what about the parts of your application that need to change? It's not practical to rebuild and run the image every time you make a change.

Instead of packaging the code up inside the container, the dynamic way of creating a container will allow you to access and modify your code, and see those updates propogated to your browser.

If you've already built the previous hello-world image, great news! You have a ruby-base image, which is all you need to run a container in this way. If you haven't built a Docker image yet, modify the Dockerfile so that it only has one line.

That's it! The only thing this image does is creates an Ruby environment for your application to run in, using version 2.1.2.

To get the code into the container, there are a few config options that need to be set on the docker run string.

The -it flag allocates a tty for interactive sessions, which we'll need in order to bundle install and fire up the application. Unlike the previous static way, which had the container start command (CMD) specified in the Dockerfile, we have specified /bin/bash as the container entrypoint command. When the container is up, you'll be dropped into a bash session automatically. Think of this dynamic container as just a normal dev environment inside a container -- you still need to execute all of the commands needed to get your application running.

An important note about the volume mount: just like with the ports, there could be an extra hop in here if you're working on a VM. Make sure that /PATH/TO/CODE is the correct directory on the VM, not your local machine. In some cases, like Boot2Docker, the filepath will be identical. You'll see pretty quickly if you made a mistake as your container directory will be empty.

Once inside the container (you'll see root@container_id as the prompt), cd into the code directory, in this case /var/app/hello-world. From here, bundle install. Then start the application with ruby hello_world.rb.

If you're working with a VM (like Boot2Docker) remember to also set up a port forwarding rule on your VM in order to access the application from your local host. You have to make two jumps: one from the container to the VM (the -p flag) and then one from the VM to your host. Make sure to avoid any port conflicts from previous containers or projects (you may want to use a different port just to make it easier on yourself). Check out the application in your browser and you should see "Hello World!". On your local system, go modify public/index.html. You'll see the changes after a page refresh. That right there is you modifying code that's running in a container!

This dynamic container concept can be applied to much larger projects as well, and even multiple projects running inside containers. For example, you could run both a UI and API project in a container -- using container linking, port forwarding, and environment variables to get them to communicate -- and actively develop against both projects.