Although Docker was a technology originally built out of a PaaS (DotCloud), there have been multiple attempts to create micro-PaaS'es out of Docker.

Flynn is one of the most anticipated Docker PaaS'es right now. With nearly 1,000 stars and dozens of forks, this open-source Docker project has not even been released yet. With a git push deployment to Docker, it is easy to see why there is so much anticipation. Flynn simplifies deploying and maintaining applications. Instead of using complex configuration management systems, Flynn allows self-serve management of containerized deployments, making life easier for ops and developers. Flynn is also different than the other projects on this list because they are a sponsored open-source project. With 14+ sponsors having donated over $80,000, this project is definitely one to watch. 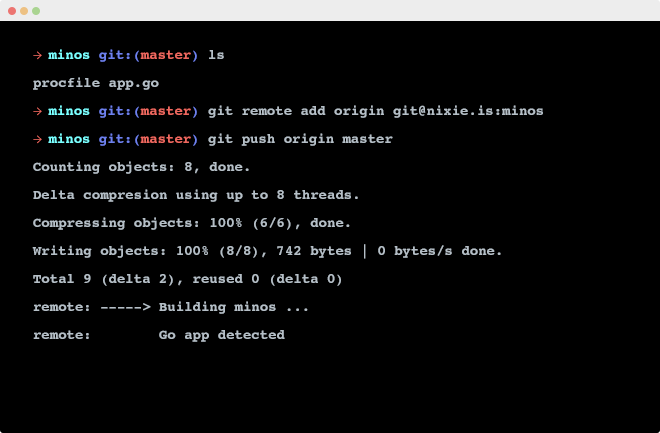 With over 1,300 stars and over 120 forks, Deis is more established than Flynn and also has a git push deploy style. Deis leverages Chef, Docker, Django, Celery, Heroku Buildpacks, and Slugbuilder to do its magic. Deis comes with out-of-the-box support for Ruby, Python, Node.js, Java, Clojure, Scala, Play, PHP, Perl, Dart and Go. Also, Deis can deploy anything using Heroku Buildpacks, Docker images or Chef recipes. Deis can be deployed on any system including every public cloud, private cloud or bare metal. Deis currently supports automated provisioning on EC2, Rackspace and Digital Ocean. In an upcoming blog post, we will compare Deis and Flynn in more detail.

If you just want the smallest viable git push to Docker container functionality in the world, take a look at Dokku. From the maker of localtunnel (a super useful utility to reverse-proxy your localhost ports to a public url), this little power-house of an open-source project has the most eye-balls. It is not as feature rich as Deis or Flynn, but it is incredibly easy to install and use on Ubuntu 13 or 12.04 x64.

CoreOS is developing best practices for deploying containerized applications to production. It is not a single open-source repository, but rather a collection of many open-source tools that can be used together including etcd, docker, and systemd. We have written about generating CoreOS files from Fig files before because getting started with CoreOS can be a daunting experience. The etcd library is used as a universal key/value store to stitch services together and share service credentials across an entire application. Unlike many of the other projects in this list, CoreOS is both an open-source project and a venture backed startup (which is why CoreOS is also listed in our Top 10 Startups Built on Docker post).

I have written a few times about Fig because it is one of my favorite little utilities for Docker (Auto-Loadbalancing Docker with Fig, HAProxy and Serf and Building Complex Apps for Docker on CoreOS and Fig). Fig lets you write a simple fig.yml file that lists all the Docker containers your app needs and how they should link together. Once you write the fig.yml you just fig up -d and your app will be up and running. This blog is managed by fig right now.

6. Serf - https://github.com/hashicorp/serf 1,652 stars, 91 forks in Mar 2014 "A decentralized solution for service discovery and orchestration that is lightweight, highly available, and fault tolerant"

Although Serf is not Docker specific, it is like jelly to Docker's peanut butter. Serf is one of my favorite new open-source projects and came from the guys who make Vagrant. I wrote about it a few weeks ago in Decentralizing Docker: How to Use Serf with Docker so you can get a great insight into how to use it with Docker there, but essentially it is a hammer you can use where CoreOS and etcd is a nail-gun. Serf is also really easy to use outside of Docker and can be used in a lot of different ways where etcd and CoreOS are pretty specific tools that aren't nearly as flexible (though definitely very powerful).

Drone (another project that is both an open source project and a startup) gives you a simple go binary, distributed in a debian file, that gives you a full CI/CD pipeline hooked natively into Docker. Cool, right? Your code never needs to leave your laptop or your company's network to be tested, which is a huge deal for big company developers who have policies that prevent them from using public hosted services like GitHub and Travis. The other cool part of Drone is that you can deploy the fully tested containers into production and be assured that the exact same environment is used in both locations. Finally, Drone lets you build custom Docker containers with whatever custom binaries and configuration you need, which is way more flexible than most CI platforms today.

Shipyard gives you the ability to manage Docker resources including containers, images, hosts, and more all from a single management interface including: Multi-Host Support, Container Metrics, and a RESTful API. I love this part, to deploy Shipyard, you just run:

Then you should be able to login to http://localhost:8000 and get the pretty UI (more QuickStart docs available). Slick! Being able to visually see all your containers is killer and Shipyard is a great way to do that.

Kubernetes is an open source implementation of container cluster management. In other words, it is a system for managing containerized applications across multiple hosts, providing basic mechanisms for deployment, maintenance, and scaling of applications. Its APIs are intended to serve as the foundation for an open ecosystem of tools, automation systems, and higher-level API layers.

Panamax is a containerized app creator with an open-source app marketplace hosted in GitHub. Panamax provides a friendly interface for users of Docker, Fleet & CoreOS. With Panamax, you can easily create, share and deploy any containerized app no matter how complex it might be.

If you measure the health of an open-source project by the open-source projects created around it, I think it is fair to say that Docker is the picture of health. This article was meant to be more of an overview than an in-depth comparison. In future weeks, we plan to talk more about the differences between some of these technologies like Flynn vs Deis.