The Lifecycle Editor offers a single, unified interface to test and refine your box configurations in live deployments. The editor is powerful because you can reapply box changes and look at how they’re executed immediately on the instance through logs.

Right after you launch an instance, the Lifecycle Editor is available on the instance profile page. To get to it, click an instance from the Instances page as shown.

The instance profile page shows the activity feed of the instance during its entire lifecycle and lets you take actions on the instance. Click the Lifecycle Editor to edit and make changes on the running instance.

Edit the box configuration of a running instance by modifying its event scripts and variable values or adding new events and variables. 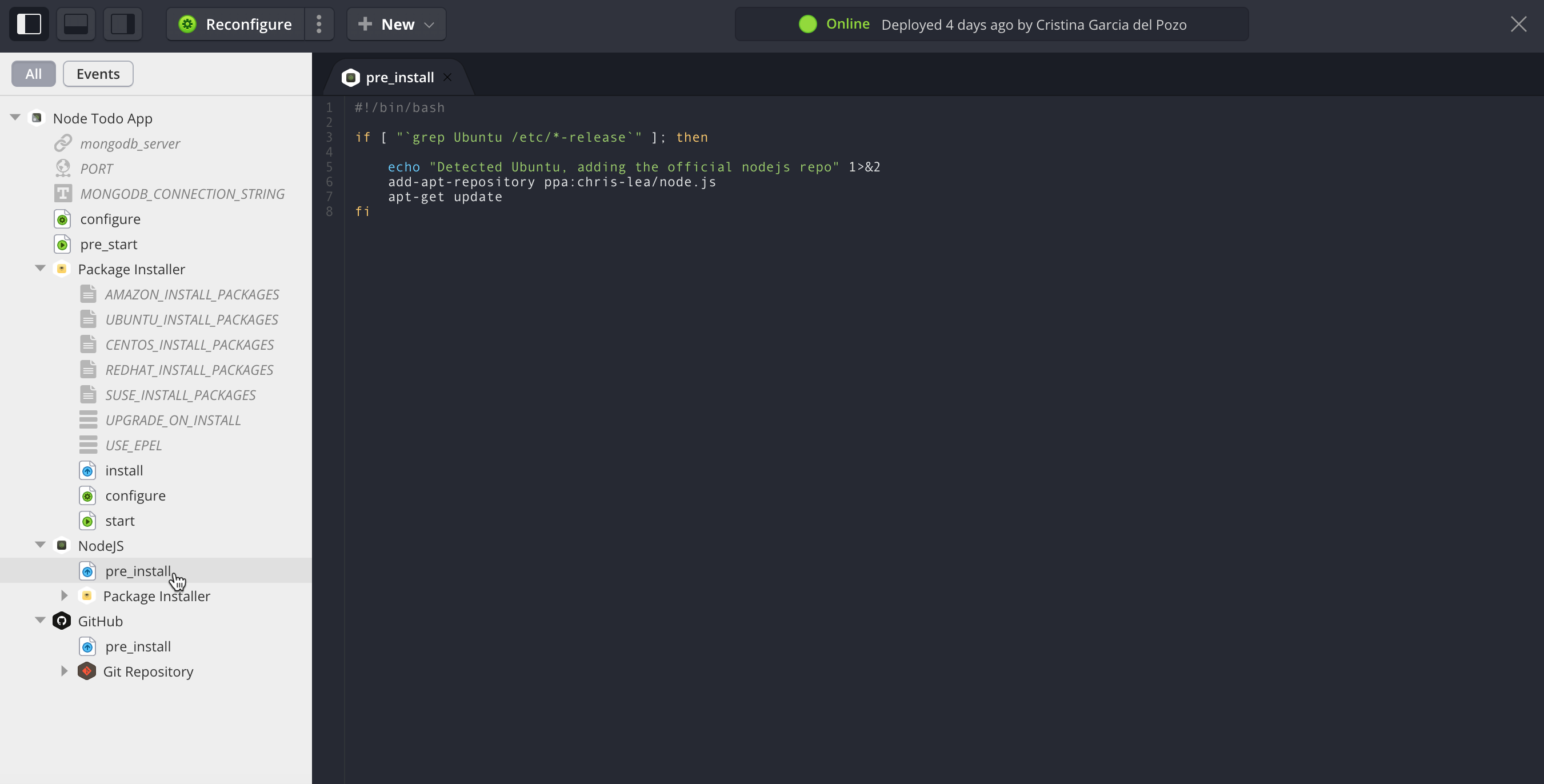 If a script has an execution timeout, a clock icon will be shown next to the event name.

The action menu allows you to set or modify the timeout value for the instance, without affecting the source box configuration.

You can redeploy an instance with different parameters by changing the variable values. 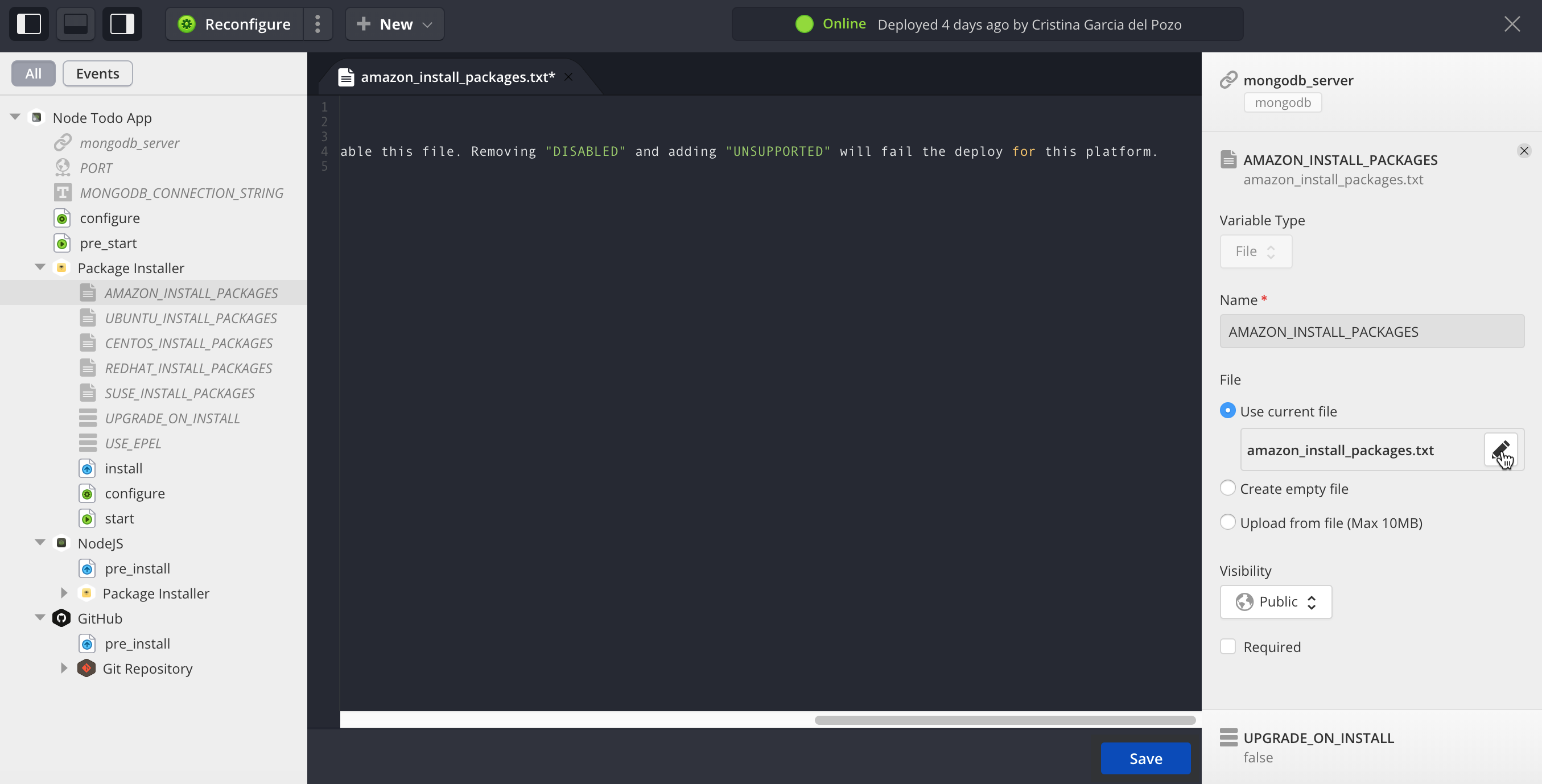 When an instance depends on another box or service–like a load balancer, caching, or database service–you can link them together with a binding. In the Lifecycle Editor, you can modify the binding value to select a different instance. 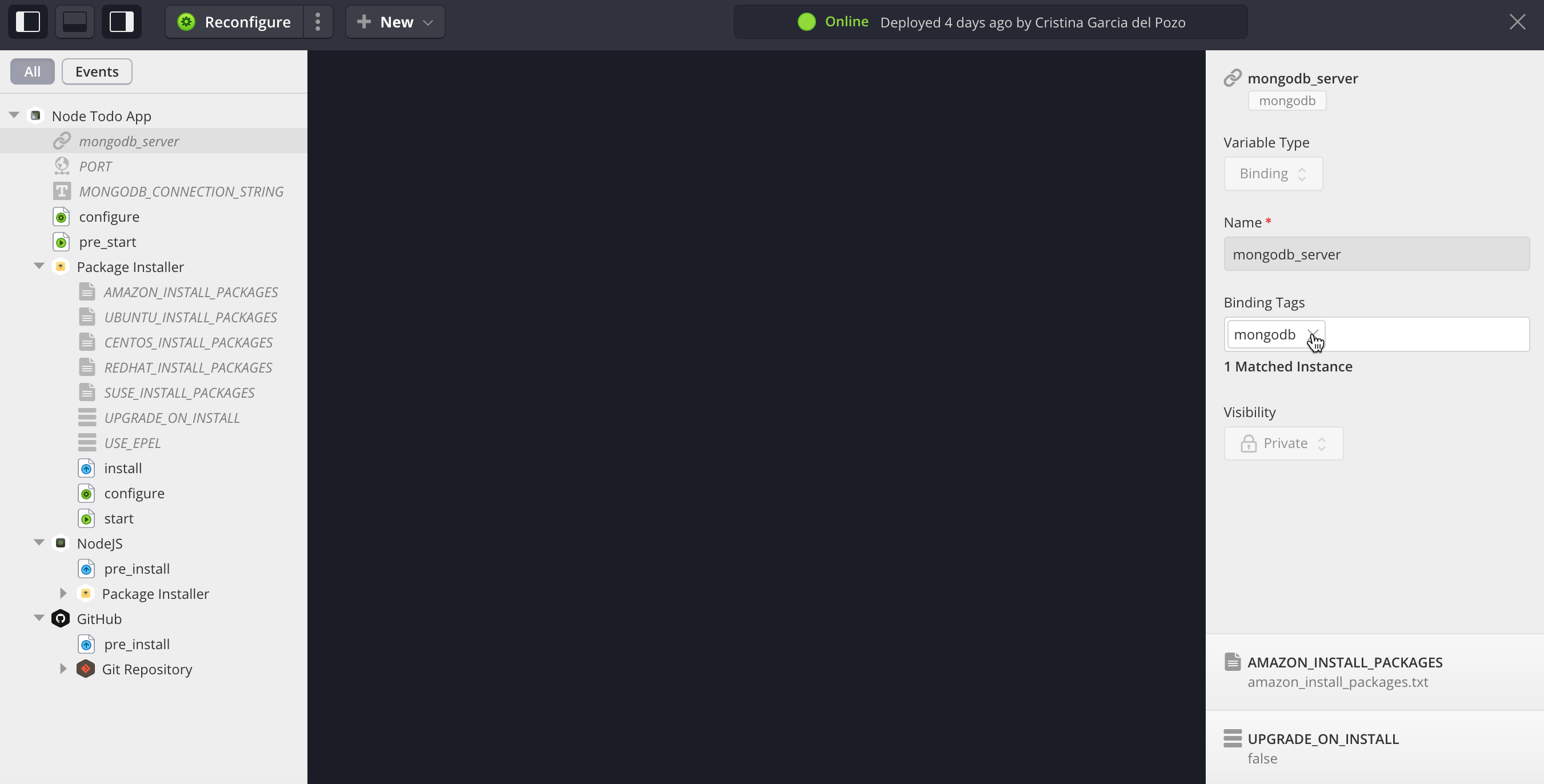 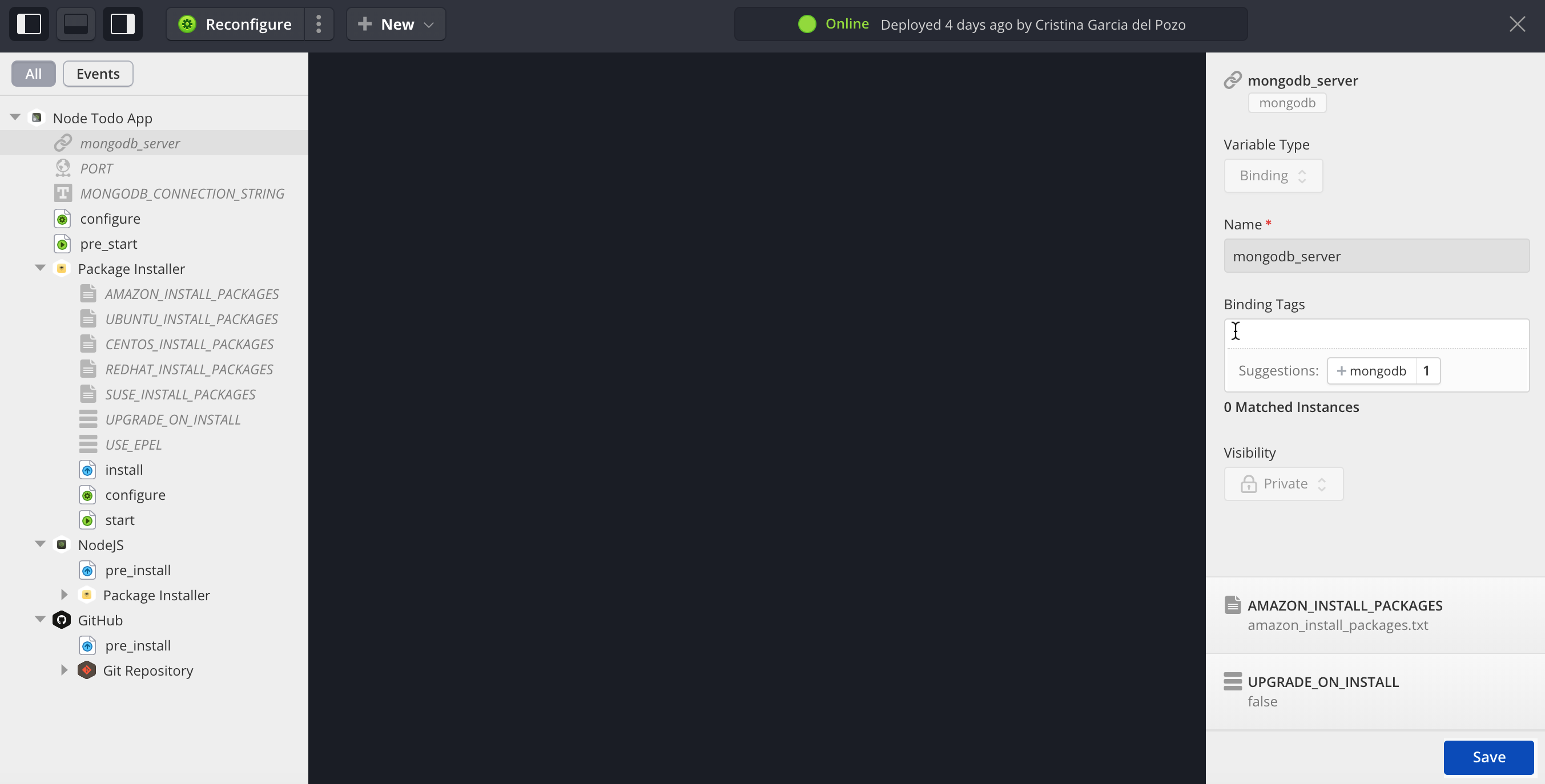 You can add new events or variables to the different packages of the box.

If you want to create a new event: 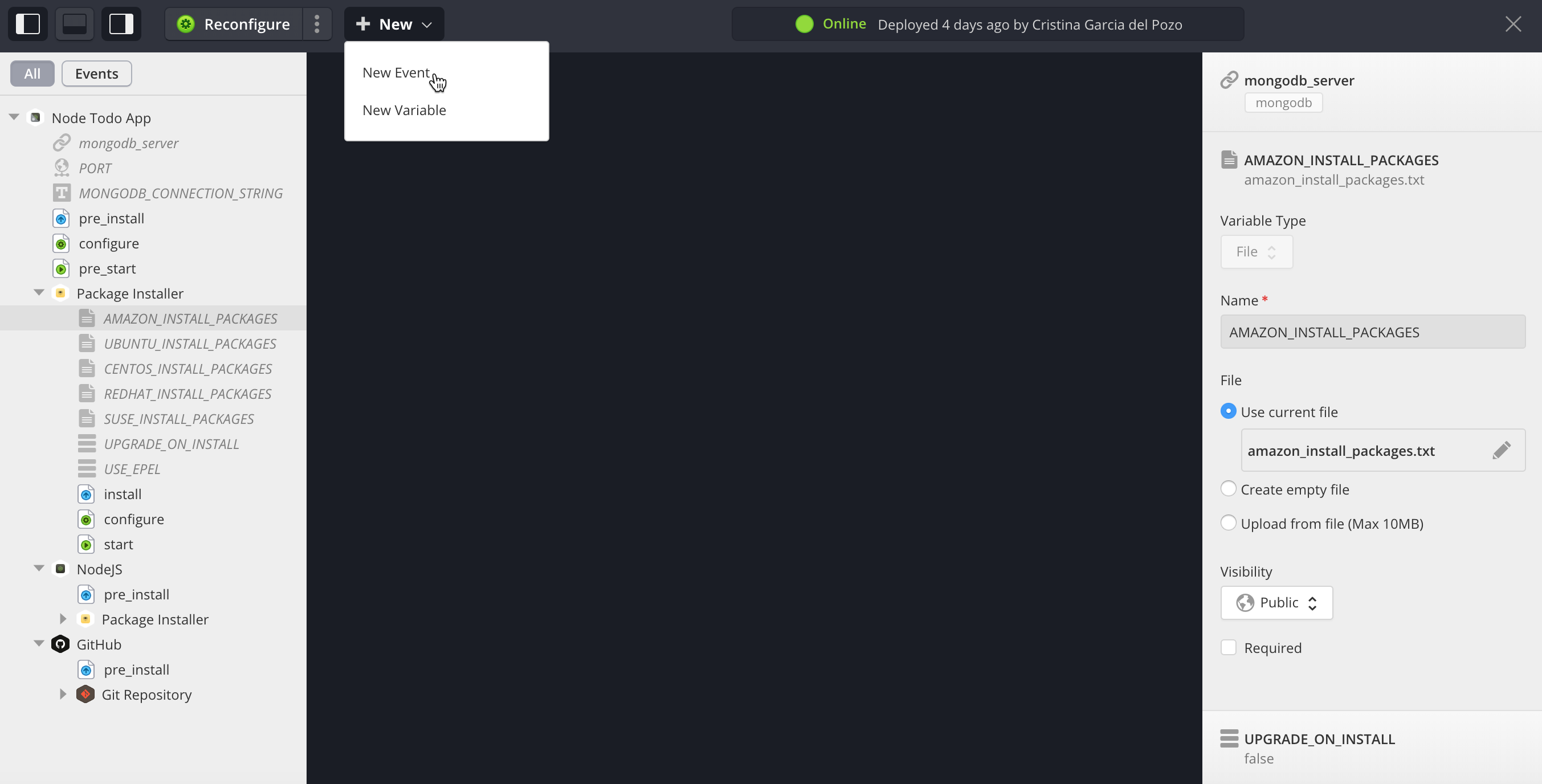 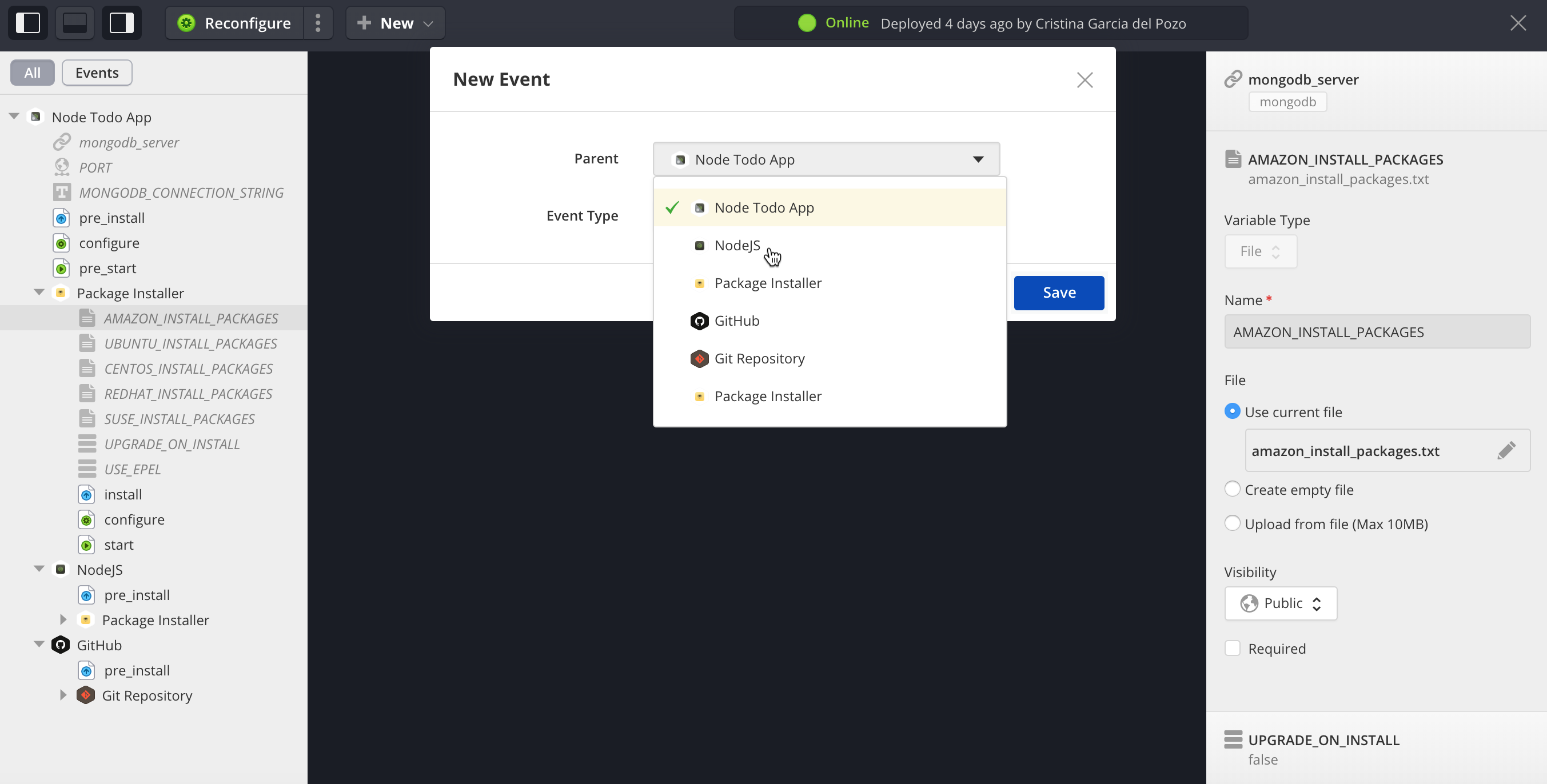 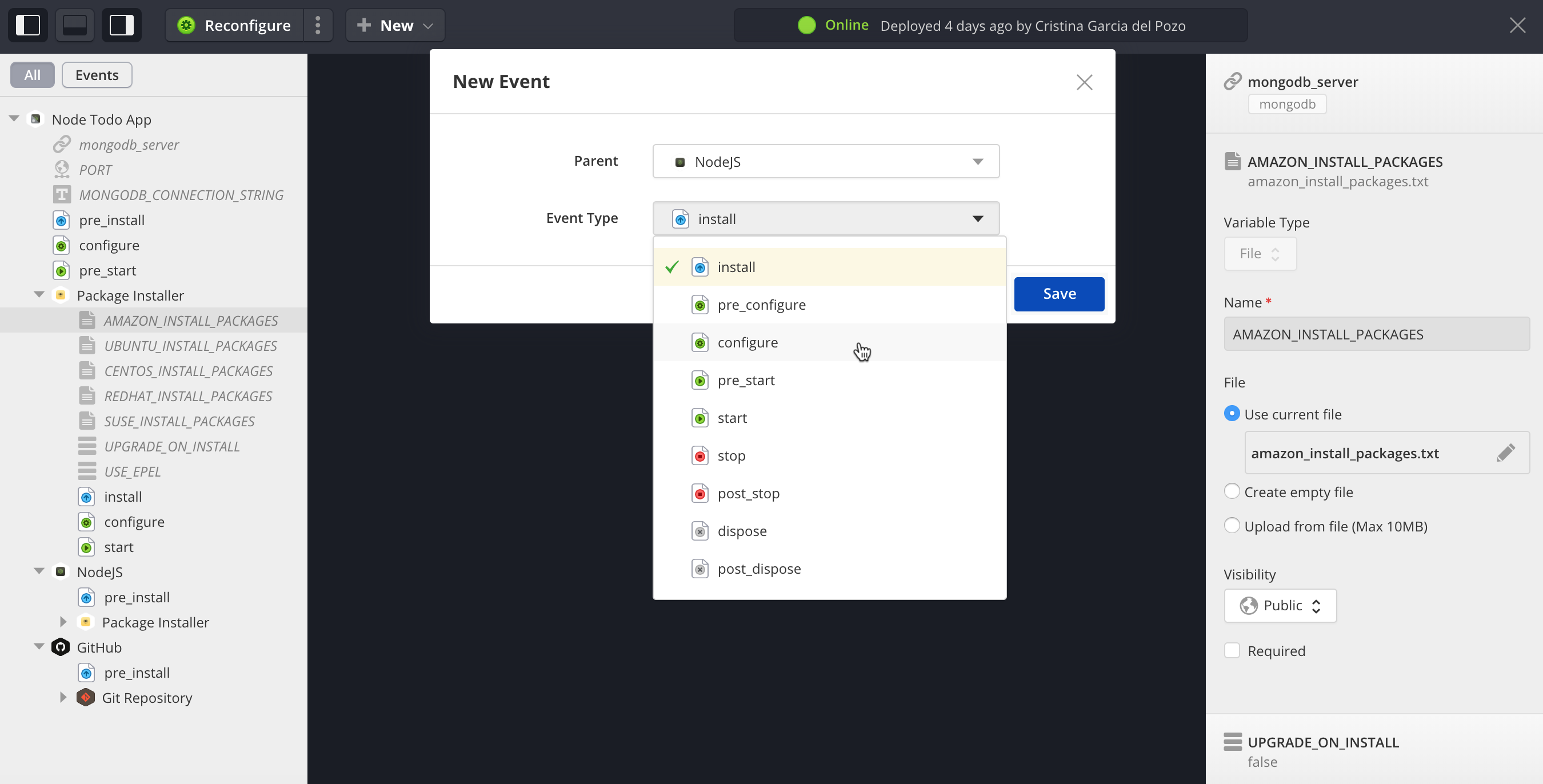 If you want to create a new variable: 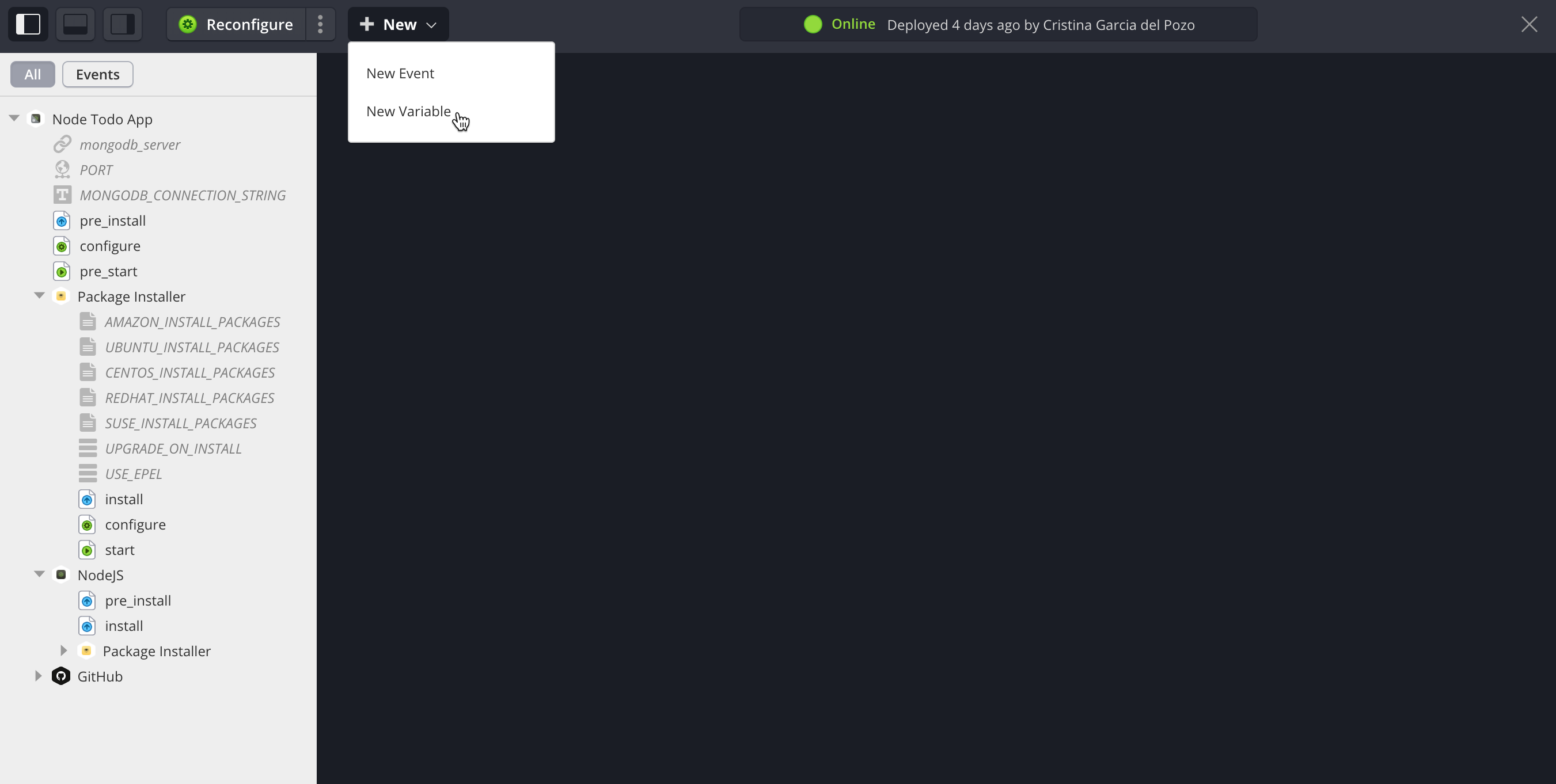 Re-Launching the Instance with Changes

Once you’ve saved changes in the lifecycle editor, they are locally stored until you trigger a lifecycle action on the instance. You can re-apply changes to the running instance by triggering an install or configure event, which runs the box event scripts in the virtual infrastructure. To learn about other actions you can take, see Handling Instance Lifecycle States.

Note: When an action is triggered, the instance is in the process of changing state. During this time, it’s in view-only mode and you can’t edit its configuration. But, you can view logs. Once the scripts are executed, you can go back to editing the instance. 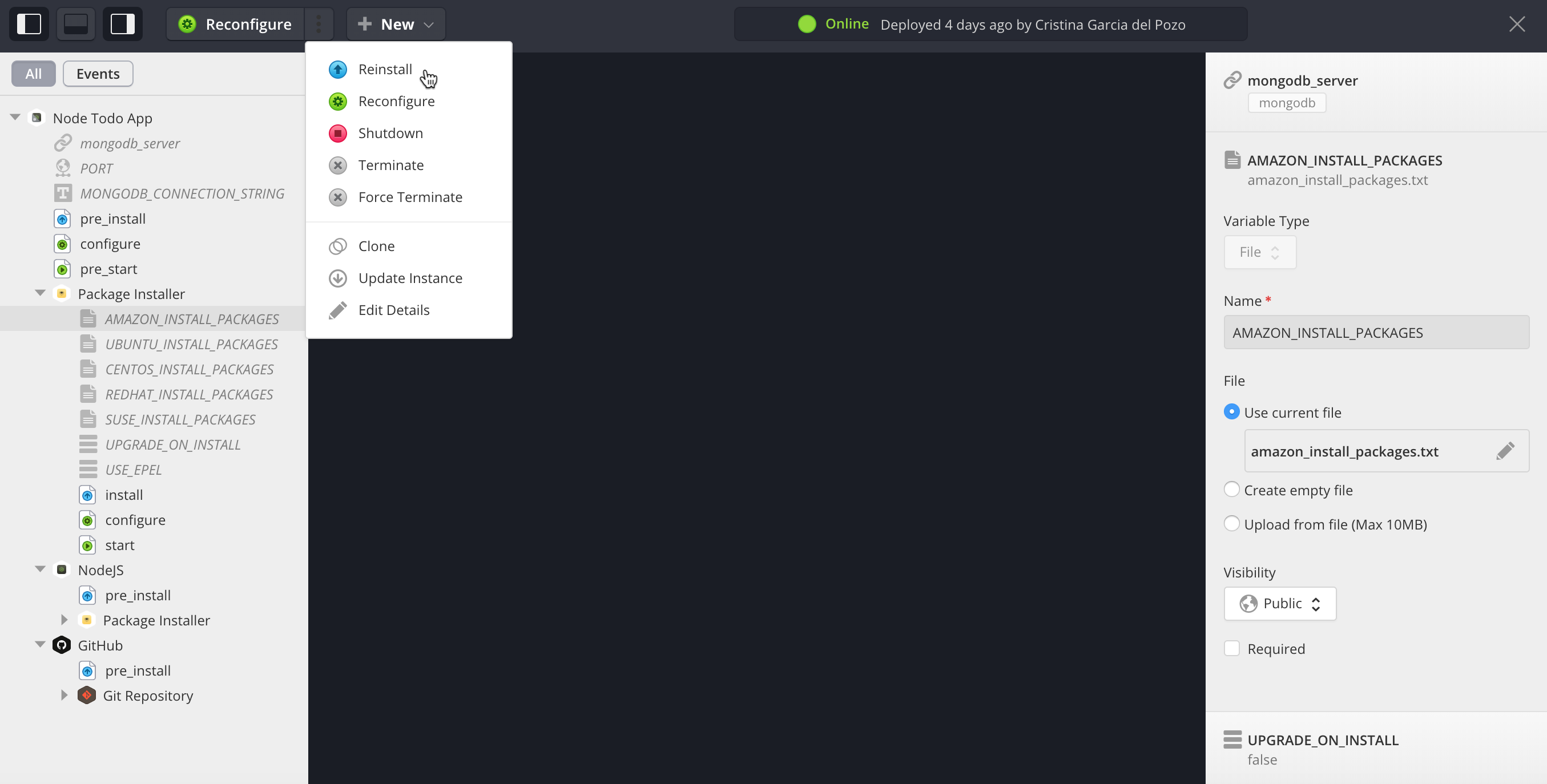 The logs panel presents the standard output of event scripts that were executed on the target virtual machine. After making script changes and triggering a lifecycle action on the instance, you can readily see their run output here.

Click Logs to monitor the progress on the instance while its being re-installed and reconfigured.

Versioning with Push and Pull

Changes you make in the Lifecycle Editor are local to the instance and are not propagated back to the box in the catalog. You can however, do a push from the instance back to the box definition. This makes a new version of the box available with these changes in the Versions tab. This is pretty useful for iteratively developing boxes without having to re-deploy from scratch.

Additionally you can also pull a version from the box definition. This is useful if you wish to revert to a different version or want to upgrade an instance to the latest version of a box. 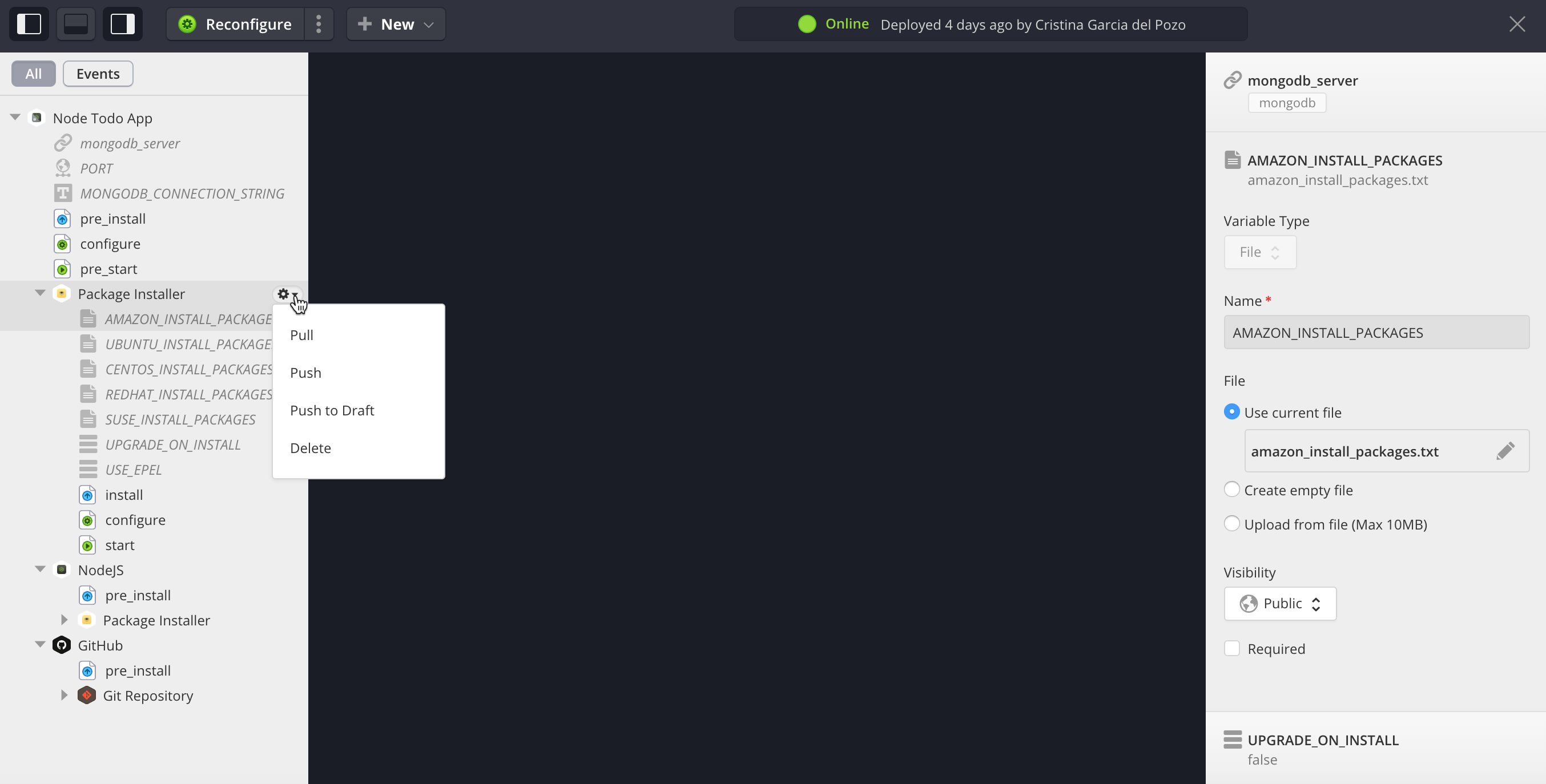 Note: Cloud Application Manager provides default boxes that are available to all users. You can use them for your deployments and modify, test the instance configuration in the Lifecycle Editor. However, because everyone accesses these boxes, you can’t push or pull to modify their box definition.

For issues related to API calls, send the request body along with details related to the issue.

In the case of a box error, share the box in the workspace that your organization and Cloud Application Manager can access and attach the logs.