Running Code outside an Instance with Task Variables

The event scripts are run, by definition, on the instance they belong to. You may have a need, though, to run some code outside the instance's operating system, either because the code must run before the instance has been provisioned or because it has already been terminated. In these cases you may use task variables.

This features is available for boxes that have been published in the catalog.

Task variables define code and an associated event. When a box with a task variable is deployed, CAM will run this code within the instance's lifecyle, at a moment indicated by the task variable's event:

Both deploy and remove are associated with the instance lifetime end to end, whereas post_deploy and teardown are associated with the lifetime of each machine. This is specially useful for instances with multiple machines (as defined in a deployment policy box) or for instances with autoscaling where machines may appear and dissapear automatically.

Although not run within the instance itself, task variables behave similarly to event scripts:

The environment supports bash, python3 and nodejs script. By default, however, all scripts should start as shell scripts. You may then embed code in other languages and execute it from within the shell script.

Task variables are only available for public, versioned, verified boxes. Because of this verification process, there is no Task Variable option in the code section of a box: you should create a File variable and then send a publish request. This request must mention which File variables should be converted into Task variables and under which task event they will run. The variables will be marked as private and will not appear in the lifecycle editor.

This example will guide you through the steps of creating a box, adding a script, publishing it with the script as a task variable and running it.

The code used in the example is listed here for reference.

The exit code of the task variables affects the state of the instance as the event scripts do: any value different from 0 will put the instance in unavailable state: 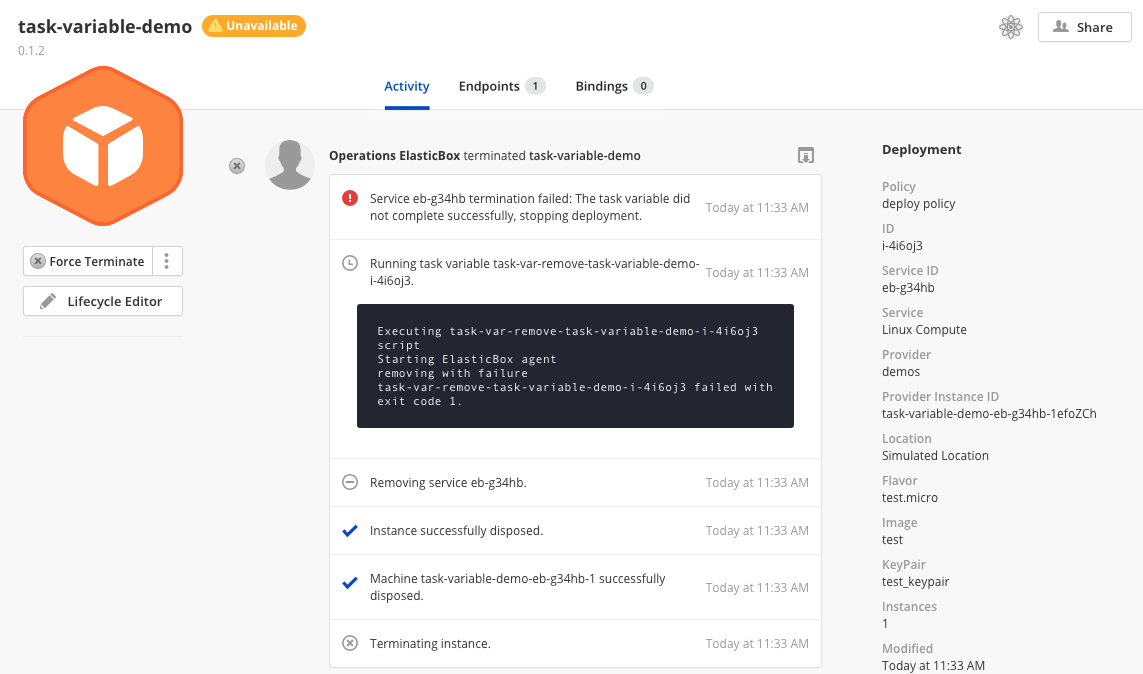 Task variables may also fail if the script does not terminate in a timely fashion: the current runtime limit is 30 seconds. If that occurs, the script will be forcibly killed and the message Task variable took too long, terminating... will appear in the log.